Constitution: “A body of fundamental principles or established precedents according to which a state or other organization is acknowledged to be governed.” (New Oxford American Dictionary)

Last week The Economist had an interesting article referencing Constitute, a project (and pretty slick web application) that aims to provide the world’s constitutions for people to read, search, and compare. At the most basic level, the site breaks down 189 national constitutions into common topics, themes, and provisions for easy comparison of the most powerful governing documents across the world. It also ranks the constitutions by overall scope, executive power, legislative power, and judicial independence. Below is a quick graphic comparing the constitutions of 19 countries in Central and South America. 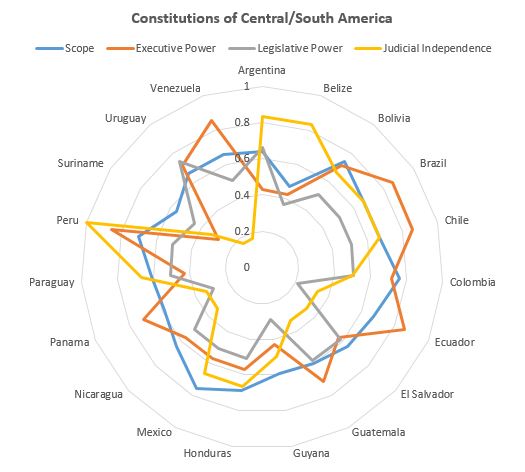 Some interesting statistics (from a variety of sources referenced at bottom):