Whether it’s love and hate, birds and weather, past and 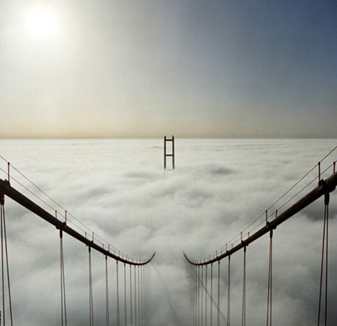 future, or me and you, there are connections – both hidden and in plain sight – in everything. More than ever, we are finding that the world is a web, and I’m not just talking about the internet. That being said, the internet does help us bring some new connections to the surface through data sharing, communication, and information retrieval.

Math is a valuable support mechanism for these types of connections, especially when credible data exists that is representative of both sides of the river. It often can build the bridge to connect the shores, although it cannot always build traffic between the two.

I’ve posted before on the connections of seemingly unrelated phenomena. How can we determine where connections should (and should not) exist? How can we determine the strength and impact (both direct and potential) of such connections? What are the implications of humans controlling such connections and manipulating the bare characteristics by which some things are connected? These are questions to which we may never have an answer, but it’s important to at least ask the questions and attempt the answers. You never know where a new bridge might appear.

Whether its physical, metaphysical, mathematical, sociological, technological, chemical, theological, biological, philosophical, etc. the connections do exist. To start, we know scientific law covers the physical: Newton’s Law of Universal Gravitation tell us that every object in this universe attracts every other object with a force that is directly proportional to the product of their masses and inversely proportional to the square of the distance between their centers. For the others, well, let’s just say the bridges are infinite and are always under construction.